In order to be able to properly understand the two witnesses’ prophecy, it is necessary to realize that the two prophets will preach a message which includes intense repentance.
This will be done with the help of faithful Christians worldwide.
Making an inventory of faithful Christians is therefore an important item:

(Revelation 11: 1) 1 Then I was given a reed like a measuring rod. And the angel stood, saying, Rise and measure the temple of God, the altar, and those who worship there.

But there is now no temple in Jerusalem for the worship of God YHWH.
When John writes about ‘trampling the holy city’ in the above part, he writes about the near future. We will discuss this further in this article.

Summary previous article:
The statement of time and times
The 70 (year-) weeks prophecy
Patterns in Scripture
Double fulfillment’s
The 70th year week in the last days
Introduction of the two witnesses’ prophecy

Characteristics of the 70th year week

In the previous article we discussed patterns in Scripture that come back. We also talked about the similarities of the preaching of Jesus versus the preaching of the 2 witnesses and about the double fulfillment of the 70th year week.
In Daniel 9:24, a number of special characteristics are mentioned about the 70th week:

(Daniel 9:24) 24 Seventy weeks are determined For your people and for your holy city, To finish the transgression, To make an end of sins, To make reconciliation for iniquity, To bring in everlasting righteousness, To seal up vision and prophecy, And to anoint the Most Holy.

The above Scripture is first fulfilled with the death of the Messiah in the middle of the 70th year week, whereby the transgression was terminated of the adulterous and wicked humanity. For by faith in the Christ sins are sealed, or are no longer charged, covered.
With the ransom sacrifice or atoning sacrifice of the Christ was paid for the iniquity of mankind, making reconciliation with God possible (Rom. 3: 23-25).
This vision of Daniel has been sealed and sanctioned, it’s going to be fulfilled exactly like that. After His heavenly rapture, Jesus presented His ransom sacrifice to the heavenly Father, after which the altar of burnt offering (Lev. 4:30) in the Most Holy in heaven was – symbolically speaking – anointed with His shed blood (Heb. 12:24) (1 Peter). 1: 2).

Further characteristics of the 1st fulfillment of the 70th year week:
The law consisted of commandments (Eph. 2:15) which the Jews could not live up perfect (Rom. 3: 21-23). The law was a tutor until the Messiah would come (Gal. 3:24).
The atonement brought everlasting righteousness to believing Jews (Rom. 6: 22-23), to eternal serve as saints in a promised new heaven and on the new earth (2 Peter 3:13).

Further characteristics of the 2nd fulfillment of the 70th year week:
The atonement will bring everlasting righteousness to repentant Christians (Rom. 6: 22-23). To be allowed to live forever in a promised new heaven and on the new earth (2 Peter 3:13). Again, Jesus’ ransom sacrifice will be used to save people. After the second fulfillment, God’s kingdom of eternal justice will start immediately.

Trampling the holy city in the last days

In the previous article we talked about the holy city, which would be trampled.
Jesus calls that trampling period ‘the times of the Gentiles’ (Luke 21:24).
Jerusalem was trampled and destroyed in 70 AD. by the Romans.
However, Daniel 9: 27b speaks of ‘even until the consummation‘:

(Daniel 9: 27b) 27b ‘And on the wing of abominations shall be one who makes desolate, Even until the consummation, which is determined, Is poured out on the desolate.’

The ‘trampling’ of the holy city in the last days is confirmed in John’s vision:

CSB (Revelation 11: 2) 2 But exclude the courtyard outside the sanctuary. Don’t measure it, because it is given to the nations, and they will trample the holy city for 42 months.

The holy city will be trampled, during 42 months. But which holy city?
When God’s house of worship is in a city, a city is holy or exalted:

There is no longer a physical temple for the worship of God YHWH in Jerusalem.
The city is – without a temple for true worship – therefore no longer holy.
Therefore, with the holy city is meant the heavenly Jerusalem:

(Hebrews 12:22) 22 But you have come to Mount Zion and to the city of the living God, the heavenly Jerusalem, to an innumerable company of angels….
(Galatians 4:26) 26 but the Jerusalem above is free, which is the mother of us all.

Revelation 13: 5 provides further information. In Revelation it is written about 7 world powers with a crowned king, in other words the political or military world powers. The 7th world power will for 42 months blaspheme Gods name and blaspheme His tabernacle:

(Revelation 13: 1, 5-7) 1 Then I stood on the sand of the sea. And I saw a beast rising up out of the sea, having seven heads and ten horns, and on his horns ten crowns, and on his heads a blasphemous name….5 And he was given a mouth speaking great things and blasphemies, and he was given authority to continue for forty-two months. 6 Then he opened his mouth in blasphemy against God, to blaspheme His name, His tabernacle, and those who dwell in heaven. 7 It was granted to him to make war with the saints and to overcome them. And authority was given him over every tribe, tongue, and nation.

According to our research, the 7th world power – the US – first goes completely bankrupt, then is helped (financially) again to present itself as the 7th world power.
So the US (and worldwide) banking crash is just about to happen:
(See as support: 7. Behold, the children of ‘the big liar’)

(Revelation 13: 3) 3 And I saw one of his heads as if it had been mortally wounded, and his deadly wound was healed….

Only after the head has been healed, the Antichrist is presented as ‘another beast with two horns like a lamb and it spoke like a dragon’ (Revelation 13: 11-12).

What, then, does ‘trampling’ of the holy city in the last days mean?
It means nothing more than that the heavenly holy city will also be mocked and trampled in the last days by a ruthless adversary, ‘an unbelieving destroyer’.
And that the holy prophets shall be prosecuted by the restored 7th world power.
That will be until the rapture into heaven of the two prophets follows (Revelation 11:12).
Then ‘the New Jerusalem‘ in heaven becomes ‘the new holy city’:

(Revelation 21: 2) 2 Then I, John, saw the holy city, New Jerusalem, coming down out of heaven from God, prepared as a bride adorned for her husband.

‘The times of the Gentiles’ denote the entire period that must elapse between the destruction of Jerusalem with its temple and the rapture into heaven in the New Jerusalem.
This holy city, this heavenly New Jerusalem, will eventually descend to Earth:

(Revelation 21:10) 10 And he carried me away in the Spirit to a great and high mountain, and showed me the great city, the holy Jerusalem, descending out of heaven from God.

Then it is announced that during the great tribulation two witnesses of the Lord Jesus will prophesy on earth:

3 And I will give power to my two witnesses, and they will prophesy one thousand two hundred and sixty days, clothed in sackcloth.”

4 These are the two olive trees and the two lampstands standing before the God of the earth.

Why are these two witnesses described as two olive trees and two lampstands?
This metaphor is also found in Zechariah 4: 11-14, where these olive trees denote the two anointed ones:

The lampstand is continuously replenished with oil (Zechariah 4:12), the light will never extinguish.
The lampstand in God’s temple is called the Menorah, the lamp of God (1 Samuel 3: 2-4). 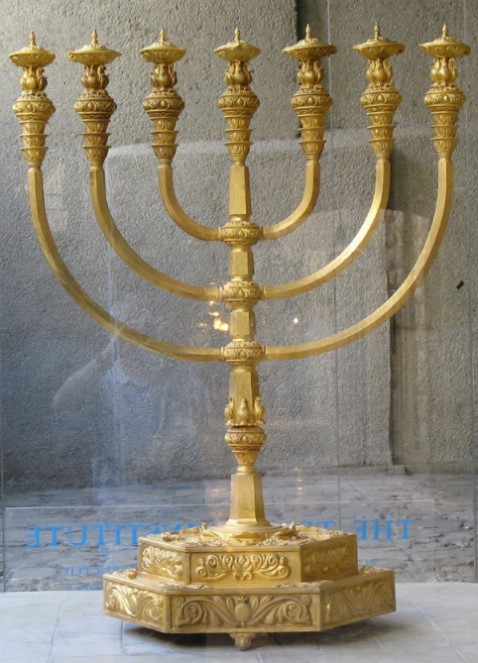 During the inspection of the 7 communities in Revelation, this becomes clear.
Every Christian community is lit with the Divine light if this community is faithful, as if God’s lampstand stands in every faithful community:

When the New Jerusalem descends on the new earth, God will illuminate the city:

The divine rays of light that bring extraordinary wisdom. The light that refreshes and gives courage. According to Jesus, in God knows is no darkness at all:

As we walk in the light, we have fellowship in the blood of Christ for the remission of sins:

Jesus spoke to both prophets and it was clear in this meeting that something great and special was about to happen that would involve both prophets.

Moses was, in a sense, a prefigure of Jesus.
Moses wrote the Scripture below:

Elijah was also, in a sense, a prefigure of Jesus.
Elijah was a great prophet of God who was yet to appear again. Not only was the coming of John the Baptist attributed as the coming of Elijah (Matt. 17: 10-11), but also before God’s day Elijah will come and restore everything:

Elijah struggled for true worship during a period of idolatry and wickedness during the reigns of Ahab and Jezebel in the northern 10 tribal kingdoms.
However, Jesus is the greatest prophet who has been on the earth:

The two prophets will be protected by an irrefutable testimony during the 1,260 days so that their enemies cannot contradict and that will silence them. Their contradictions will condemn them:

The leaders of this world will want to catch the two prophets by their words, just as happened with Jesus back then:

They need not worry about how or what to speak, the spirit of the Heavenly Father speaks via them:

Meek Christians from all parts of the world will recognize the voice of the two witnesses’ as of divinely inspired origin and sustain them until the Christ will have come:

In the days of Ezekiel, the Jewish people had become apostate and wicked, just like mankind today. In those days, Ezekiel received further information as a watchman over the people:

As Christians, we also have a duty to warn apostates and the wicked.
So be thoroughly prepared, because God’s word will still have result for many:

6 These have power to shut heaven, so that no rain falls in the days of their prophecy; and they have power over waters to turn them to blood, and to strike the earth with all plagues, as often as they desire.

Their testimony will not go unnoticed, powerful signs will be shown.
No one can say afterwards, I was not warned:

As a prophet, Elijah had been given the authority to let it not rain:

This time period corresponds to the 42 month or 1260 day period that the two witnesses will prophesy (Revelation 11: 2-3).
As a prophet, Moses had been given the authority to turn water into blood:

7 When they finish their testimony, the beast that ascends out of the bottomless pit will make war against them, overcome them, and kill them.

According to Daniel 7: 25-26 as well as Daniel 12: 7, the power of the holy people is being shattered. In the middle of the 70th year week, so at the end of the preaching work of the two witnesses, the two holy prophets will be overcome and slain (Rev.11: 7).

Characteristics of the 70th year week
Trampling the holy city in the last days
The two witnesses prophecy (Revelation 11: 3-14)
Who are the two olive trees, the two anointed ones
The scarlet wild beast will kill the 2 witnesses’

One Reply to “4. The booklet of John”