To love the God of creation.pdf

An explanation of topics for a dialogue with young people; topics where young people have to deal with in their lives, with support of Scripture.

Faith and religion are not a relevant issue for many younger today.
When you as a younger say that you are a Christian, you are often not taken seriously.
Occult cases do have an interest, as can be seen in the video clips of artists.
How can that be explained? This is largely due to the example that young people get.
Young people start comparing their own lives with popular people, which are often self-centered people without moral principles.
Also, the current elite do no longer know what sort of craziness they want to do again. They have already tried lots of things like drugs and different forms of sex.
They come in circles where they are tempted to do things with underage boys and girls, pedophilia, which has been regarded as extremely shameful since time immemorial.
For innocent youth, it is hardly to imagine that the world is largely led by elite through a (Satanic) cult. Who are more interested in secret agreements for the expansion of power (on a global scale) and self-interest than in the interests of the people:

NKJV (Luke 4: 5-7) 5 Then the devil, taking Him (Jesus) up on a high mountain, showed Him all the kingdoms of the world in a moment of time. 6 And the devil said to Him, “All this authority I will give You, and their glory; for this has been delivered to me, and I give it to whomever I wish. 7 Therefore, if You will worship before me, all will be Yours.”

Occultism, the belief in the false words of Satan with his wicked rituals and sex worship, is a form of warfare. It is to wage war against our reliable Creator:

NKJV. (Ephesians 5: 11-12) 11 And have no fellowship with the unfruitful works of darkness, but rather expose them. 12 For it is shameful even to speak of those things which are done by them in secret.

Young people, do not be afraid, you will know them by their fruits (Matt. 7:16).

The theme of this article is; How young people can love the God of creation.

Cognitive dissonance is an unpleasant feeling that we get when we are told something that goes against our conviction (or what we have seen ourselves).
Cognition = memory, reasoning, perception / Dissonance = not matching
Many repress this unpleasant feeling and then just accept the lies.
Christian Youth: Believe your own eyes and do not allow the lies.

Young people are no longer taught in schools how to think for themselves and how to make their own choices, but what according to education they must accept as established truth. But unfortunately for them, young people are intelligent and have extraordinary qualities.
The education system – beginning from the very first groups – contains a socialist agenda, in which the sexual preference cannot be fixed (LGBTQ-etc) and must be able to occur in all forms and views.
Abortion, euthanasia and divorce must be taken for granted. The stable caring family with a father and mother no longer fits into this. The current neo-communism, a new style of communism, is the promoter of the LGBTQ and transgender program that (for them) replaces the stable family as a base.
The best choice is almost never discussed, that is choosing Christianity.
Christianity is based on mercy, love, justice and freedom.
(See also: 5. The promised Messiah https://www.dojc.nl/?p=4470&lang=en)

Younger who ask critical questions about what they are taught or who are not submissive, are referred by the school to a (child) psychiatrist and are almost immediately diagnosed with AD(H)D. They are put on medication and usually receive Ritalin (similar to amphetamine) to ‘become calm in their head’. Schools no longer want critical students, but students who accept what they are told by the teachers without critical questions.

The media reports and education have thoroughly brainwashed young people about the freedom of sexual views, so that free sexual behavior is completely normal for them and ‘have no problem with that’.
Many young people, therefore, do not want to stand out in terms of free sexual behavior and want to ‘be part of’ and not fall behind.
Young Christians must therefore always struggle to remain faithful to Christian principles that come from our Creator (YHWH):

NKJV (Ephesians 5: 5) 5 For this you know, that no fornicator, unclean person, nor covetous man, who is an idolater, has any inheritance in the kingdom of Christ and God.
NKJV (Proverbs 10:23) 23 To do evil is like sport to a fool, But a man of understanding has wisdom.

Since the reduced fear of HIV (AIDS), free sexual behavior has undergone a huge increase, resulting in a record of venereal diseases:

The spread of syphilis in Europe is intensifying, said Andrew Amato-Gauci, the head of the HIV/AIDS, sexually transmitted infections and viral hepatitis program at the European Centre for Disease Prevention and Control (ECDC).
https://www.zerohedge.com/news/2019-07-21/europe-faces-looming-syphilis-epidemic

The Centers for Disease Control and Prevention (CDC) released data today showing that STD’s hit record highs in the U.S. for the fourth year in a row. Approximately 2.3 million cases of chlamydia, gonorrhea, and syphilis were diagnosed in 2017.
http://www.ncsddc.org/stds-hit-record-highs-again-threatening-millions-of-american-lives/

Christian youth hold on to what their great example Jesus told about relationships. Jesus quoted the book of Genesis: (Matt. 19: 4-5)

Adam and Eve had by God’s blessing the first marriage. Committing in a marriage and then building together the relationship has continued throughout human history.
Unfortunately, the education system and the media also have their own ideas about the unique creation, which ideas deviate completely from God’s reliable word.

Young people are taught that all life on earth came from itself by evolution. Not only the education, but almost the entire society is convinced of this theory.
But evolution is not scientific, it cannot be repeated or cannot be proven. The beginning of life cannot explain anybody at all.

Biogenesis; the teaching that life can only come fort from life.
Louis Pasteur (1822-1895 AD) demonstrated that no bacteria and algae can develop in water that has boiled in a sealed goose-neck bottle.
Out of this experiment, the law of biogenesis is formulated: life only comes from life.
It is a natural law that cannot be broken, this law has been proven and is certain.

Abiogenesis or non-biogenesis
Around 1950, Stanley Miller and Harold Urey had the attention on what is now called the Miller-Urey experiment. Miller and Urey made a laboratory setup in which they (partially) simulated the early earth’s atmosphere. In a special sphere space, sparks were fired through this simulated atmosphere of various gases. This resulted in amino acids, the building blocks for proteins. 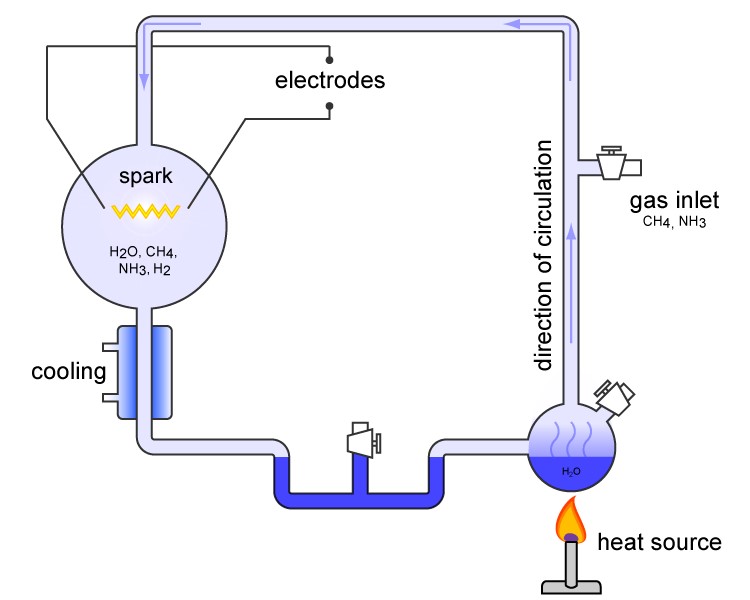 Proteins must contain the right combination of amino acids, otherwise they are useless. However, during the experiment half left-turning and half right-turning amino acids appear to arise. Only left-turning amino acids are found in living cells.
But even proteins are not even close to life.
You also need DNA or RNA to be able to reproduce.
The spontaneous alteration of amino acids into the proteins required for an extremely complicated single-cell organism has never been observed and can never be observed.
It is therefore only a theory, an impossible theory, which confuses gullible believers or makes young people believe in the wrong outcomes. The experiment has in fact unambiguously demonstrated a Designer of life, a Creator.

Young people, give a Christian answer when such an evolutionary story passes by.
Be never ashamed to stand up for your Creator. Some will laugh at you, but others will respect you for your conviction, faith and trust.
On that occasion, tell them about the comprehensive creation with extraordinary interaction and tell about the current problems of the small animal world.

The small animal world is under pressure

The small animal world is under pressure mainly due to the use of harmful pesticides that kill weeds such as glyphosates and products that kill insects on fruit and vegetables such as chloropyrifos. The removal of protective vegetation along the fields also does no good. 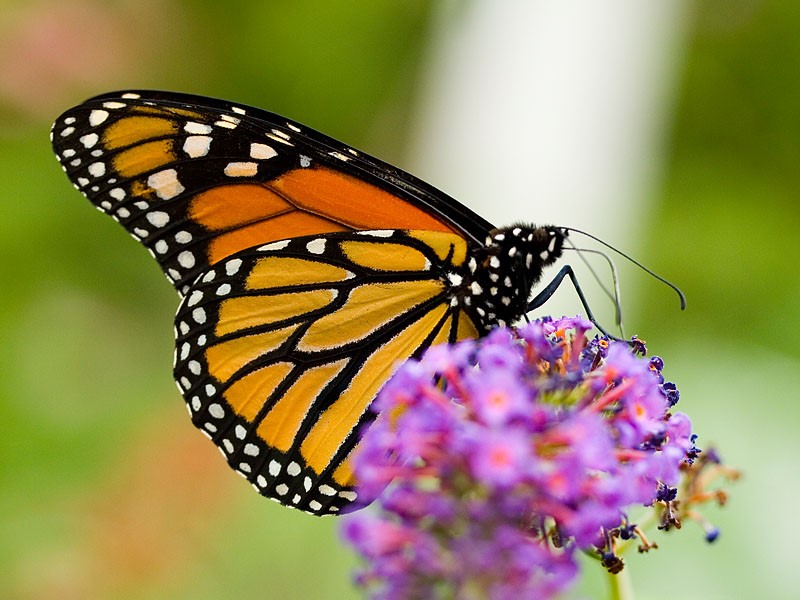 About 40% of all insects have disappeared in the last 10 years: https://www.theguardian.com/environment/2019/feb/10/plummeting-insect-numbers-threaten-collapse-of-nature

Due to agrochemicals and destructive practices, butterfly numbers fell by 66%
https://www.naturalnews.com/2019-08-04-agricultural-chemicals-butterfly-numbers-plummet.html

Parents, be prepared and DISCUSS with your children:

Christian youths should be able to respond freely to their convictions at school. They must be able to tell about the ingenious creation that people cannot fathom.

Parents; Discuss with your children about examples of the uniquely beautiful creation. Let your child tell what his feelings are when subjects about free sexual behavior, LGBTQ, or evolution come up. If possible, make personal agreements with the teachers about your children.
Young people are vulnerable if they are in social isolation or have few or no friends. They then desperately need the support and attention of their parents.
Parents, give trust to your children.

Youth; Enjoy the beautiful creation and be thankful to God for it. Go on out!

NKJV (Matthew 6:26) 26 Look at the birds of the air, for they neither sow nor reap nor gather into barns; yet your heavenly Father feeds them…

Furthermore, don’t accept money or expensive things of over-friendly people who want to put these in your hands. Resist this and always tell your parents about it. Also do not let yourself be dragged along with worldly youngsters with their sexual adventures.
Even though most young people are easy concerning sex, that does not mean at all that their massive acts are good or that they are wise.
Otherwise, read the book of ‘Song of Solomon’ where two lovers declare love to each other.

NKJV (Ephesians 5: 6) 6 Let no one deceive you with empty words, for because of these things the wrath of God comes upon the sons of disobedience.
NKJV (2 Corinthians 6:14) 14 Do not be unequally yoked together with unbelievers. For what fellowship has righteousness with lawlessness? And what communion has light with darkness?

God will not forget greedy and unjust persons who destroy the unique earth:

NKJV (Revelation 11:18) 18 The nations were angry, and Your wrath has come, And the time of the dead, that they should be judged, And that You should reward Your servants the prophets and the saints, And those who fear Your name, small and great, And should destroy those who destroy the earth.“

It will never be allowed that the promised new creation will be destroyed again.
Young Christians will be able to enjoy that new creation forever, because they are allowed to live everlasting on the new earth (John 6: 40, 47), with Jesus as King. (Luke 19:38)